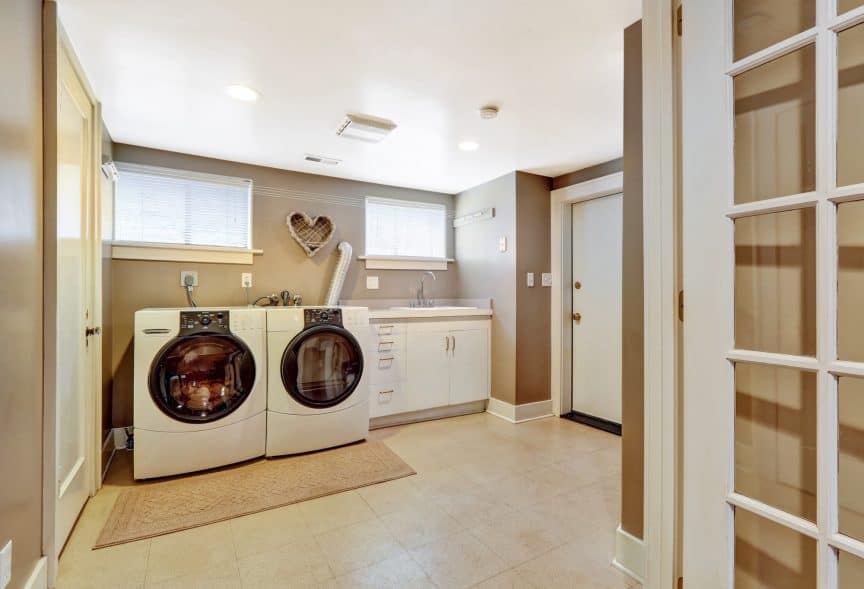 When building a new house or renovating an old one, among the many concerns is proper ventilation. And one room you might not think of ventilating is also one that might need it the most, the laundry room. Should you go to the trouble and expense of installing an exhaust fan in your laundry room?

A laundry room should have an exhaust fan and proper ventilation for various reasons. These include controlling moisture levels and preventing mildew, as well as preventing lint fires and preserving the health of the home’s occupants. Exhaust fans can also keep your laundry room cooler.

The degree to which your laundry room needs an exhaust fan can vary depending on how modern the laundry appliances are, for all homes, it is better to be safe than sorry. Read on to find out why.

An important part of maintaining a comfortable and healthy environment in your home is controlling the amount of moisture in the air. Deficient moisture levels can cause dry skin and contribute to nasal discomfort, nose bleeds, and sinus infections.

On the other hand, excessively high interior moisture levels can damage household electronics, contribute to higher cooling costs, and promote the growth of unsightly and potentially dangerous mildew and mold.

In a typical American household, one of the primary sources of excess interior moisture is the laundry room and its appliances, because modern laundry appliances are designed to contain as much water as possible while in operation.

However, quite a bit of moisture can and will escape when a washing machine is left sitting open with freshly washed and still wet clothes in it. It is commonly advised that clothing be put in the dryer as soon as possible after the wash cycle is completed.

A considerable amount of moisture can also escape from a clothes dryer as it combines a heat source and wet clothes.

Both washing machines and dryers can be surprisingly long-lasting appliances, at least in terms of their mechanical components, but one of the first components to deteriorate is the moisture seals.

So even if an older appliance still does its job, it could be leaking a surprising amount of water vapor into the home.

Remember that mold and mildew are unsightly and potentially toxic.

To begin, mildew is a member of the fungus kingdom completely separate from molds, and it prefers ambient temperatures of between 77 ℉ (25 ℃) and 88 ℉ (31 ℃), which is the temperature range of most homes.

In addition, mildew requires moisture levels above 60%, and a faulty seal or a laundry room without an exhaust fan invites this level of moisture.

Mildew can damage interior paint and wallpaper and cause mild allergic reactions in humans, whereas mold can contribute to dangerous and potentially lethal illnesses, including cancer. Removing excess moisture from laundry rooms is essential to prevent the growth of mildew and mold.

How to Remove Excess Moisture From Your Home

The two most common ways to remove excess moisture from a laundry room are to use a dehumidifier or an exhaust fan. The exhaust fan is the better option for two key reasons: energy consumption and convenience.

A standard residential dehumidifier draws between 300 watts and 700 watts of power, which, compared to other household appliances, is not much at all. But a typical residential exhaust fan only uses between 5 watts and 35 watts.

Dehumidifiers also have the added complication of the need to physically empty the tank. If you forget to do so, the appliance will either stop working or start leaking; the latter of which adds to the moisture problem.

Exhaust fans also provide additional benefits, which will be explored in the remainder of this article.

Household clothes dryers combine heat sources, fuel, and air, and as a result, are some of the worst residential fire hazards.

According to the United States Fire Administration (USFA), a division of the Federal Emergency Management Administration (FEMA), clothes dryers contribute or directly cause 2900 residential fires every year.

Modern dryers are safer than they used to be, especially if properly used and maintained, but accidents and neglect do happen. Under normal operation and proper use, dryer lint will either be caught by the lint trap or blown out of the dryer’s exhaust tube.

But if the lint trap is not present or clogged, or the exhaust tube is damaged or disconnected, dryer lint can escape into the laundry room.

This lint can create a situation somewhat like a grain elevator fire, where particulate matter suspended in air is lit on fire, and the flame spreads from particle to particle resulting in an explosion.

If you install an exhaust fan, it can help prevent a lint fire by sucking the lint up and out of the house.

As this article is being written, most of the continental United States is blanketed by thick smoke from mega-fires in western states like California and Oregon. But even with so much smoke and soot in the outside air, the air inside your home may actually be more contaminated and hazardous to your health.

According to the EPA, the average American house may have dozens of sources of atmospheric contamination, ranging from solvents used in cleaning products to radon leaking up from groundwater.

One of the worst rooms for indoor pollutants in the average house is the laundry room.

Atmospheric contaminants in the average laundry room can include but are not limited to:

A volatile organic compound (VOC) is a carbon-based chemical that easily becomes a vapor at standard atmospheric temperature and pressure. High levels of VOCs can cause minor symptoms like eye, nose, and throat irritation, or severe symptoms like liver damage and epistaxis (nasal hemorrhage).

In some cases, VOC exposure can even cause cancer.

One of the worst sources of VOCs in an average home is scented cleaning products, including laundry detergent and fabric softener. During the wash and drying cycles, the fragrance chemicals are vaporized and spread into the air in the laundry room.

This condition is known as the “sick building syndrome.” It means that a person experiences the aforementioned symptoms rather severely when inside a specific building. The symptoms then ease or disappear when they leave the building.

These are caused by poor indoor air circulation.

Since the air in your laundry room, not to mention the rest of the house, might be severely polluted, you may want to clean it. One of the most effective ways to clean your indoor environment is to exchange the air inside of your house with the relatively cleaner air outside.

And this is where an exhaust fan can be indispensable.

One of the best places to locate an exhaust fan is one of the most contaminated rooms in your house, such as the laundry room. Sucking out the air in the laundry room and ejecting it out of the house will prevent the extra atmospheric pollutants present therein from flowing through the rest of the house.

Most importantly, a laundry room exhaust fan is an effective and energy-efficient way to improve the air quality inside of your house by promoting the exchange of air between the heavily contaminated indoors with the comparably clean outdoors.

There are many benefits to installing an exhaust fan in your laundry room.

Venting air from a laundry room to the outside world will help control the moisture level in the house, which will limit or prevent the growth of mildew and mold. It can also reduce the risk of a dryer lint fire by ejecting floating lint from the room.

The building codes of several states require that commercial laundry facilities without large open windows be ventilated through industrial exhaust fans. Maybe it is time that similar regulations be added to residential building codes.