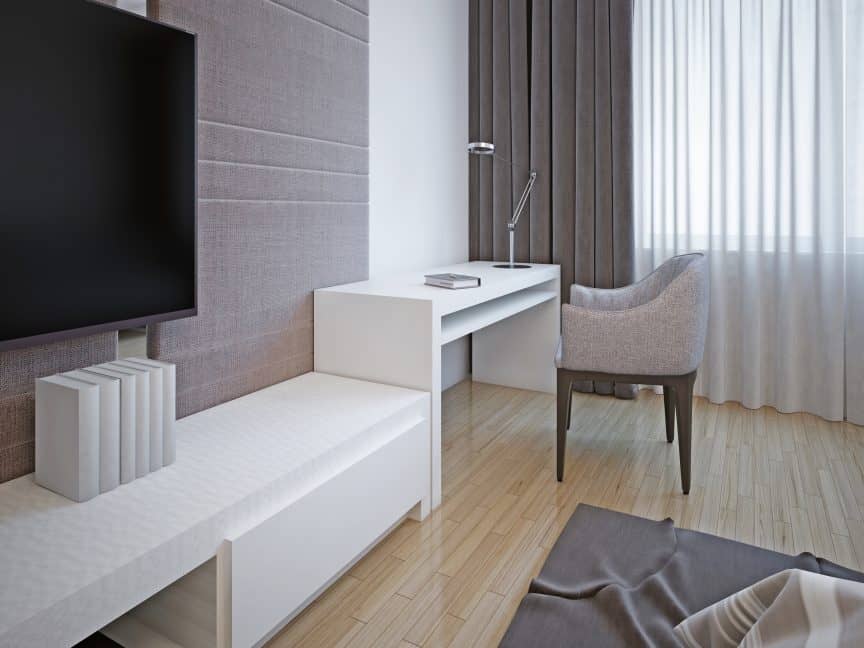 Mounting a TV on a wall is usually quite simple and straightforward. All you really need is the right screwdriver and drill, mount, and screws. The latter two often come packaged together. Of course, you will also need a dry, flat wall to mount the TV with ease. But what if you want to do so with a curved wall instead?

The remainder of this article will discuss primary differences in curved and flat wall structures, as well as the process of mounting a TV on a curved wall and best practices to ensure the finished mount looks great in your space.

The second difference between a curved and flat wall is the amount of separation between two consecutive studs behind the wall. A stud is one of the inner supporting layers of walls: they are usually made from wood. When it comes to mounting TVs or other large, heavy objects, studs are used as a sturdy base to hold them in place.

Flat walls have straight and linear stud arrangements. Studs are usually placed at an even 16 or 24 inches apart from one another. However, curved walls vary in stud orientation. Although they are also set between 16 or 24 inches apart, the distance between each stud may change, depending on the extent of the wall’s curve (Westlake Hardware).

For example, with flat walls, you may see studs arranged consistently. There is another stud placed every 18 inches along a wall. Curved walls, on the other hand, lack stud placement consistency. The first two studs may be 16 inches apart, while the next stud is 24 inches away.

The higher the degree of a wall’s curve, the harder it is to mount a TV. However, if you find an even stud placement at the right distance apart along a curve, you are in luck.

How to Mount a TV on a Curved Wall

The process of mounting a TV on a curved wall can be a bit more complicated than with a flat wall. In some cases, if you are unable to find an even stud placement, you might have to “correct the curvature” of the wall so that you can work around it.

Find the Studs within the Wall: Generally, studs within walls are placed every 16 or 24 inches apart. To see how your wall is oriented, you will need a stud finder to help you. Use the stud finder tool to identify where along the curved wall studs are currently placed and mark them with a pencil.

Measure the Curve: Next, you’ll need to measure the extent of the curve of your wall. To do this, place a straight ruler against the portion of the curved wall you plan on mounting your TV on. One end should be in contact with the wall. Ideally, this should be where a stud is located for mounting, while the other floats in front of the wall surface. Then, use a measuring tape to measure the difference (in inches) from the floating ruler end to the wall. The number you get is the wall’s radius of curvature.

Compensating for the Curve

To properly mount a TV on a curved wall, you will need to make sure you have the right length of screws/bolts that compensate for the radius of curvature. That way, when you install the mount on the wall, both sides will be connected to a stud along the curve. For example, four-inch bolts may be needed on the left side, while 5-inch bolts are required for the right. Note that the side with your floating ruler from earlier will need the longer bolts.

After making the appropriate adjustments to the wall and finding the right placement for two consecutive sets of screws for the mounting bracket, the remainder of the process is similar to mounting a TV to a flat wall.

Attaching Brackets to Your TV

The kind of brackets you will use for your TV will depend on the brand and model. Some TVs come with a mounting set. Others need to be purchased separately, so make sure that you have all the right parts on hand before starting.

Mounting the TV on the Curved Wall

Now that you have attached the mount to the TV, next, you’ll need to install the mounting bracket on the wall.

The issue of mounting on a curved wall is reduced when the proper curvature measurements are calculated. The bracket on the wall must be straight to the highest degree.

It is advisable to use a stud finder to get the perfect position for the wall mountings. You can mount without studs, but it is risky as your TV may fall. Wall studs create the tighten molting.