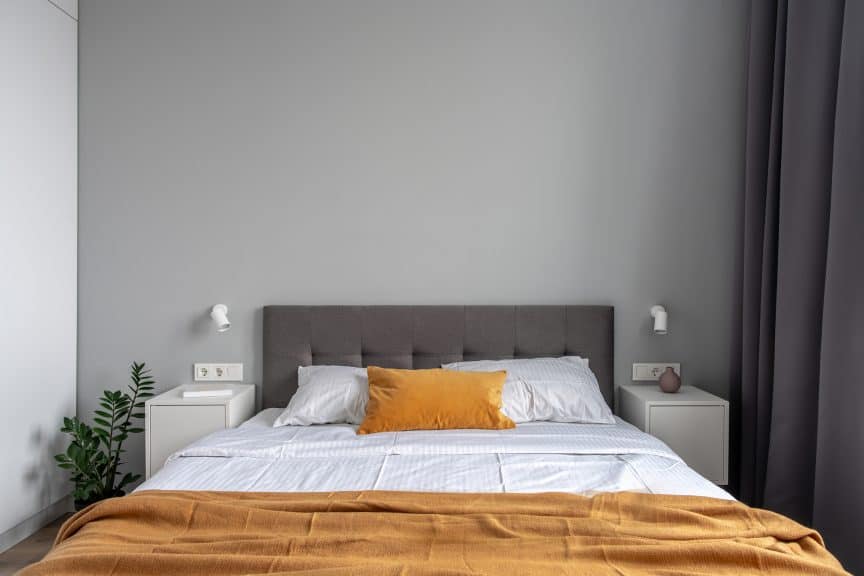 It’s a known fact that beds are the most crucial element of any bedroom, making all other things revolve around them. Nightstands may be the second focal point of the bedroom as they add to the room’s beauty. But do you need to have two nightstands in your bedroom?

According to feng shui principles, a bedroom should have two nightstands as this creates balance and symmetry. Plus, this adds storage space and allows each person in a two-person bedroom to have his or her own bedside table.

Read on to see if your bedroom should have two nightstands. We’ll also talk about having one nightstand in a bedroom and how you can make up for the second nightstand.

The Benefits of Having Two Nightstands

There are quite a few reasons you might put two nightstands in your bedroom, and each offers a unique benefit.

Two nightstands on either side of the bed are more aesthetically pleasing because of the balance and symmetry they create. Since the bed is the central point of a bedroom, you should put it in a place that anchors your bedroom and shapes the entire space.

By placing two nightstands on the sides of your bed, you bring equilibrium and symmetry to the space and make the view smoother for the eye.

A bedside table isn’t just an element of beauty; it also serves a functional purpose. It’s a great storage place where you can put stuff in and on. Plus, it’s a great space to put a lamp on because it comes in handy when you want to read before sleep.

If the nightstand has drawers or is in the shape of a cabinet, you can put your books in it or use it to store anything that you need access to before going to sleep. So, if you have two nightstands, you’ll have more storage areas in your bedroom because there’s never too much storage area in a house, and we can always use some extra hiding spots.

Having two nightstands helps you declutter your bedroom. So, instead of putting your stuff in or on one nightstand, you can share them between the two.

If you live with a partner, both of you could equally use the nightstand next to your side. If you read before bed, you can put a lamp on each nightstand for your comfort.

Each of you may have different stuff you use before bed, which has to be as close to you as possible. After all, you don’t want to fight over who gets the side of the bed with one nightstand!

Having two nightstands also means you can have more storage areas to free up your bedroom space. This way, energy can flow more easily around the room.

Another reason for having two nightstands is that, according to feng shui, you should have pairs of objects in your bedroom to attract love or reinforce your existing relationship. Even if you’re single, feng shui experts recommend getting pairs of everything to attract love.

Reasons for Having a Single Nightstand

Although you might like to have two nightstands in your bedroom, there’s no rule against having one nightstand. Besides, it may not be feasible all the time.

Here are some reasons you may have to settle for one nightstand:

The main reason is that you don’t have enough space to accommodate two nightstands. After all, who wouldn’t want more storage or symmetrical aesthetics in their bedroom? Unless you want to deliberately place one bedside table in your room to add some unique flair to it.

Suppose you have a small room that forces you to put one side of the bed next to the wall. There’s no way to put a pair of nightstands there.

You may also have enough space for two nightstands, but they take up so much space that you feel it’s better to sacrifice one of them to get more space to roam about in the room. You don’t want to knock over something or have your toe stuck in the leg of the nightstand whenever you walk past it.

There may be no point in getting two nightstands if you have a single bed, especially for storage and access purposes. If you don’t care about balance and symmetry, you may feel quite satisfied with one nightstand.

In fact, since a pair of night tables is only necessary for a queen or king-sized bed, you don’t need to worry about one nightstand for your single bed.

How Many Nightstands a Bedroom Should Have: The Verdict

Despite all the reasons that say two nightstands are better than one, there’s no rule that you have to strictly follow. It’s all up to you to design your bedroom’s look.

That’s particularly the case if you can’t afford to buy a second nightstand or your square footage doesn’t allow it. It’s your call to choose between functionality and aesthetics. After all, having enough space to move around the room is more important than symmetry.

In addition, you don’t need to worry about the feng shui principles about love and relationships. Having a pair of nightstands on your bed’s sides may promote a deliberate process of creating a space for romance, but do you think a troubled relationship can be fixed by adding one nightstand to your setting?

It all comes down to your comfort and how you feel about the overall feeling of your bedroom when you lay your head down at night.

Alternatives for a Second Nightstand

Even if you can’t afford to get a pair of nightstands, you have plenty of options that can replace the second one. With a little creativity, you can prepare the perfect setting for your bedroom, as your nightstands don’t need to match.

Here are some other pieces of furniture you can use instead of the second nightstand:

End table: An end table can perfectly replace the second nightstand, especially if it’s a similar design and material. Even if it’s not, you can create an illusion of balance and symmetry by putting the same lamps on the nightstand and the end table. For example, this Traditional Chair Side End Table by Ashley Laflorn, available on Amazon.com, can add to the beauty of your bedroom with its traditional look, especially if your nightstand has a matching color.

A chair: You can always get playful and creative and go for totally mismatching furniture. As long as you can use it to hold your glass of water, a lamp, or your book for a late-night read, why not go with a beautiful chair? Just find a common thread between them, be it the material, the color, or even age and style.

A chest: A gorgeous antique chest goes a long way in giving your bedroom a nice look that matches the first nightstand and provides lots of storage space, too. Even if your nightstand has a contemporary style, there’s nothing wrong with having a piece of antique furniture.

A bookcase: When you’re short of real estate and think a bookcase is a must, why not kill two birds with one stone? Use the bookcase instead of the second bedside table and provide lots of storage space. You could also put a basket on one of the shelves and hide some of your bedroom’s clutter.

If you think a bedroom should have two nightstands, you’re not wrong. They create a sense of balance, provide lots of storage room, and give you and your partner a place to put your things.

However, it’s not a rule that you need to follow strictly. If you’re short of space, you don’t need to have two nightstands.