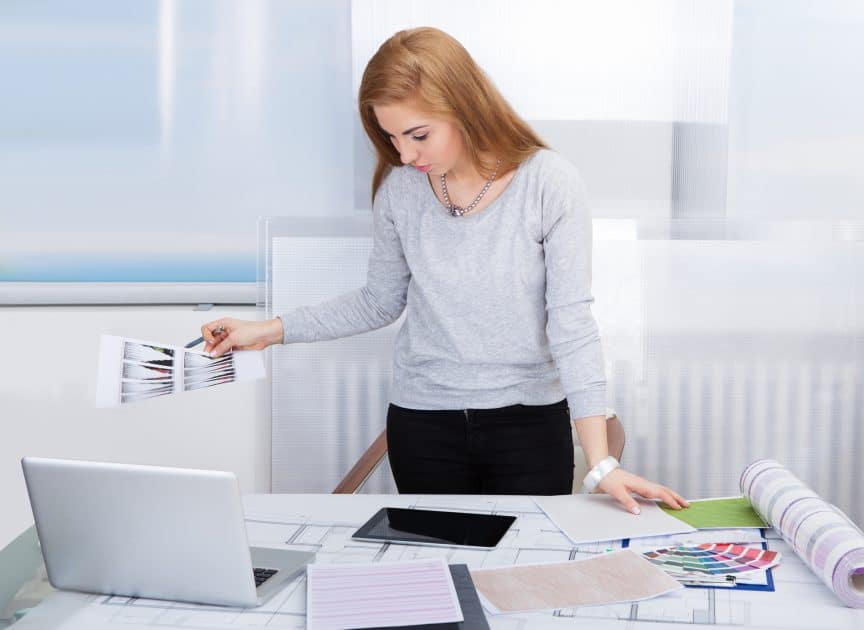 Building your own house gives you the opportunity to have the home of your dreams. However, you will also take on a great deal of stress trying to stick to a budget, deal with setbacks, and decide who to hire. Given the demands on your budget, you might wonder if you need to hire an interior designer to take your blueprints and turn them into a home.

You don’t need an interior designer when building a house, but hiring one can be extremely helpful. The general contractor will be able to build your home, but it’s the interior designer who is trained to add the little details that will elevate the house into your ideal home.

The Role of an Interior Designer

Interiors Designers Are Not Just Decorators

While decorating is a significant part of the job, an interior designer can do a lot of things long before any paint gets mixed or rugs unrolled. The designer can plan for the best electrical, plumbing, and lighting layouts for each room if they are early enough in the home building process.

If you have ever been in a house with some incredible functional detail – including outlets conveniently hidden in clever spots, storage under the staircase steps, or lighting in kitchen cupboards – the homeowner likely hired an interior designer to act as a guide during the house’s building process.

The designer will lead the carpenters, plumbers, electricians, and other contractors from the ground up. Instead of trying to keep tabs on everyone, the interior designer does this for you, which means they are the only point of contact you need to communicate with.

Since the designer knows what each contractor needs to do, they will take a lot of the stress off your shoulders. The house building process will ultimately be much smoother and happier when you have an interior designer at your side.

Benefits of Hiring an Interior Designer

An interior designer’s job is to:

However, beyond these, there are other benefits that come with hiring an interior designer that may not be immediately obvious.

While selecting your own furniture can seem appealing, oftentimes when it arrives you find it doesn’t quite fit right.  Whether it’s fitting it up the stairs or through the door, or just the way it fits within the room, the DIY approach can result in some expensive errors.

An interior designer will ensure that all your purchases are right for your home. Designers know how to measure everything and have software programs to plan out the furnishings in 3D blueprints.

If you’re building a multi-story home, they’ll ensure that you don’t end up with furniture that doesn’t fit correctly – and if you do fall in love with a piece of furniture that is too large for the stairway, they’ll work with the general contractor to ensure there’s a way to get it up those stairs!

Interior Designers Bring the ‘It’ Factor

Many people have good taste, but that isn’t usually enough to take a home to the next level. Interior designers have an education and formal training so that they can give each home that special touch.

It takes practice to find the balance between statement pieces and coziness. Your home will feel less like a collection of rooms and more of a cohesive, unified space.

The interior designer’s work is done with great attention to detail, such as hints of color in a kitchen backsplash echoing in the accent colors in the living room.

If you decide that you want to sell your home in the future, you will greatly appreciate the value your home will gain from having been built with the help of an interior designer. According to Forbes, this added value alone covers the initial cost of the interior designer and more!

Not only will your home sell for more, it will also typically sell faster and with a lot less back-and-forth between realtors. Your home will be special, and buyers will notice!

Downsides to Hiring an Interior Designer

I have said quite a lot about the benefits of hiring an interior designer when you are building a house, but there are also potential drawbacks. Here are a few of these drawbacks, as well as solutions to avoid them.

Interior Designers Can Be Expensive

How much you spend on an interior designer will vary greatly depending on the size of your home, how much of a role you want them to take, and the overall hours spent working. That said, no matter how you look at it, a good interior designer won’t be cheap.

However, there are a lot of ways that you will make your money back. As discussed before, if you sell the home at a later date, interior designers pay for themselves.

They also have access to insider deals. You can save a lot of money on furnishings when you are purchasing through an interior designer. If you find a designer with good contacts and who can incorporate things you already own, you may find that the designer ends up saving you more money than they charge you!

While having an interior designer take the reins can be a huge relief, you still want to make sure that you are communicating and in agreement for the entire process. Otherwise, you might end up not feeling at home in your house.

Finding an interior designer that has the appropriate training and makes you feel comfortable and included at every point is incredibly important. If you decide to bring a designer on board, make sure to shop around and find someone who is a good fit for you and your home!

Additionally, make sure to work with your designer so that you can bring in your favorite personal details from your old home into your new house. A good designer will help you bring these elements into your house in such a way that they blend seamlessly with the new design features.

If you are unsure if you will be using an interior designer, this article is intended to assuage your uncertainties and help provide answers to the questions you might be asking.

While it is not strictly necessary, bringing an interior designer on board when you start building a house is absolutely worthwhile. They have a trained eye for beauty and will give you peace of mind that building will go smoothly. A designer will make building a house an enjoyable process and create the home you have always wanted.