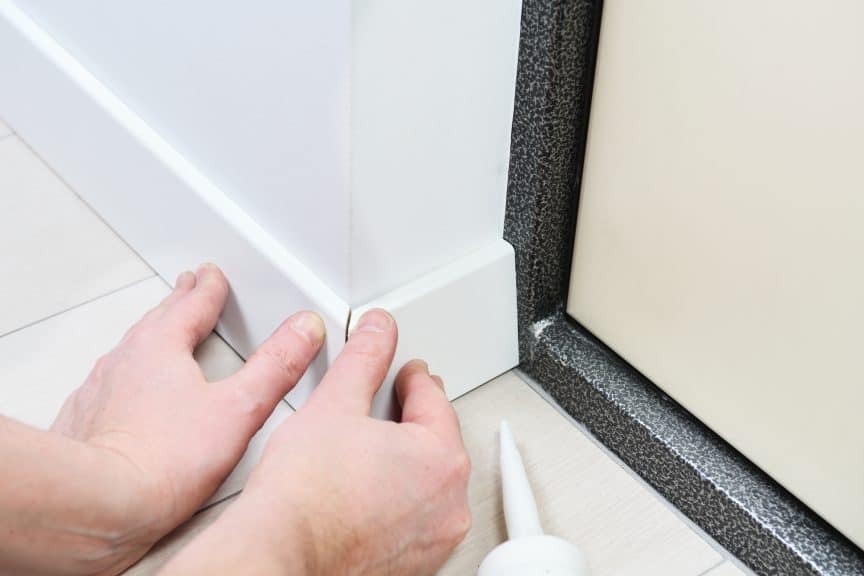 If you want to fix a board in place, you’ll need something to hold it there. Nails are the traditional choice, but what if you don’t want to deal with sharp nails and hammering or don’t have the tools? Can you glue baseboards instead?

You can glue baseboards instead of nailing them. Depending on the project, it might even be a better idea than the typical hammer and nails. Whether it’s the best decision depends on what you’re trying to do and how you’d like it to be done. Sometimes both nails and adhesive are used.

In this article, I’ll discuss when it’s appropriate to use glue over nails, how to glue baseboards properly, and some other information you might find helpful. If you have a project planned and need to know what tools to use or how to do the process correctly, you’ve come to the right place.

Use Industrial Strength Glue on Baseboards

You can’t use just any arts and crafts glue for this. You’ll need something made tailored to your needs.

Even the strongest glue can have trouble sticking to some surfaces, and there’s the potential for the seal to deteriorate over time. When choosing an adhesive for any task, consider the environment you’ll be using it in.

The most important thing is to find industrial strength glue that’s specifically made for the task and works with the material it’ll be sticking to. If you’re planning to install something in a bathroom or other area that could be affected by moisture, make sure the adhesive is also waterproof.

I would recommend Gorilla Heavy Duty Construction Adhesive (available on Amazon.com) because it’s affordable, waterproof, and works on many common household surfaces, including wood.

What Are the Downsides of Gluing a Baseboard?

If you try to glue something to a stick-resistant surface, it could fail to stay in place or fall off later, so be wary of such environments. Read your glue’s label to make sure there’s nothing you need to know about that can degrade it, like moisture or chemicals it could be exposed to. One unavoidable problem with these products is that they can do their job too well.

The main downside of gluing a baseboard is how difficult it becomes to remove it, should you need to. This usually isn’t a problem since baseboards are intended to stay where they’re fixed, but if you’re worried about removal, you may want to consider using nails.

That doesn’t mean you can’t use glue for something that might need to be removed in the future. Just be wary that you may have to use a solvent to dissolve the glue seal, which means you need to be able to reach it.

Safety Risks of Gluing a Baseboard

Sharp nails and heavy hammers might seem more dangerous, but glue isn’t an entirely safe alternative. Practical risks aren’t all you need to be aware of, as safety is also a concern. Remember, you’re not just dealing with classroom glue; this is industrial strength and made to last.

Here are some tips for handling glue safely:

How To Glue a Baseboard

If you’ve read this far and glue is still your preferred choice, it’s a pretty simple process.

Consider wearing gloves to avoid getting any glue on your hands, and follow these tips:

Other Ways To Secure a Baseboard

Glue is fast, convenient, and easy to use. However, it doesn’t work for everything and comes with some drawbacks. If you don’t think industrial glue is what you need or you can’t find any that suits your project, you may be tempted to try something else.

Caulking is a decent alternative, but be sure the caulk is made of something that’s safe on wood and whatever other surfaces you may need to stick it to. Note that caulk can degrade faster than glue and might not create as long-lasting of a bond if used by itself.

If it’s the whole process of holding a tiny nail in place while swinging a hammer at it, you could use a nail gun to remove the hassle from the process. A drill could also work if you’re okay with using screws instead of nails. It’s also an option to use glue and nails together if you want to be absolutely sure a board will stay in place for as long as possible.

If you want to glue a baseboard in place, it’s a perfectly acceptable alternative to nailing in many cases. You can even use both if you’re looking for added security. Just remember that industrial glue is still a heavy-duty tool and should be respected as much as anything else in your toolkit.