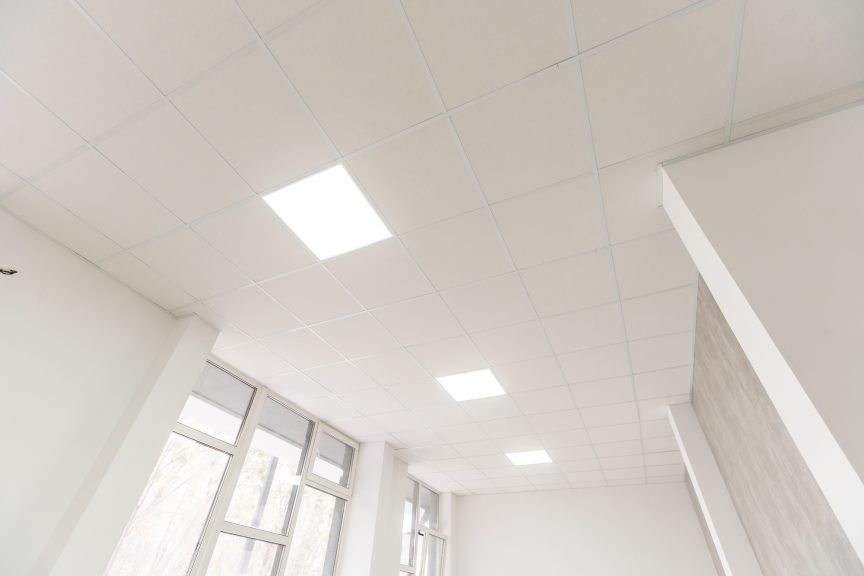 Ceiling tiles provide homes and businesses with a cost-effective method to cover unsightly elements like pipes and ducts. However, have you considered how effective ceiling tiles are for your health? Could they in fact be making you sick?

This article will discuss how ceiling tiles can make you sick and the associated health conditions their presence can trigger. I’ll also reveal the telltale signs that indicate your ceiling tiles need replacing and provide advice on when to call a contractor.

How Ceiling Tiles Make You Sick

There are several ways that ceiling tiles can cause serious health concerns to you and everyone in your building. For instance, the presence of the following substances in your ceiling tiles could trigger ill health:

Formaldehyde is contained in adhesives, resins, and plastics used to bind ceiling tiles. It’s more commonly found in tiles made of fiberglass and mineral fiber.

Formaldehyde has been classified as a known human carcinogen by the International Agency for Research on Cancer (IARC). It can irritate your eyes, nose, throat, skin and provoke respiratory problems like asthma attacks and difficulty breathing. Long-term exposure to formaldehyde has been linked to nose and throat cancers.

Mold can irritate your eyes, nose, throat, skin, and lead to respiratory problems such as asthma attacks and difficult breathing. According to the Cleveland Clinic, long-term mold exposure has been linked to chronic bronchitis and emphysema.

Asbestos was commonly used in construction materials until it was discovered as a health hazard in the 1960s. Since this discovery, the mineral has been banned in 67 countries and heavily regulated in others, including the United States. Asbestos was used in ceiling tiles to increase their resistance to fire and heat.

Breathing in asbestos fibers can cause serious health issues for the lungs, such as lung cancers, mesothelioma, and asbestosis.

Polyvinyl chloride (PVC) is a plastic used in many construction materials, including acoustic ceiling tiles. It has been linked to several health problems, including asthma, allergies, and cancer.

PVC contains phthalates; these are chemicals added to plastics to increase their strength and flexibility. Phthalates can be released into the air when PVC products are heated or damaged. These chemicals have been linked to reproductive problems, congenital disabilities, liver damage, cancer, and hormone disruption.

When Should You Change Your Ceiling Tiles?

Now that you know the potential dangers that ceiling tiles can cause, it’s natural that you’ll want to prevent this from happening in your building. Replacing ceiling tiles is one of the best ways to ensure this, but when is the best time to change them?

You should change your ceiling tiles after every ten years. Monitor the tiles for water discoloration, increasing difficulty to clean, and any signs of brittleness such as sagging. Once you notice these indicators, the repair is usually out of the question, and replacement is the only option.

Replacing Ceiling Tiles: When To Consider Using a Contractor

So you’ve identified some damage to your ceiling tiles, and you’d like to have them replaced. While replacing ceiling tiles is a job that doesn’t always require a contractor, there are instances when hiring one is vital. Let’s explore some of these circumstances.

A licensed contractor should complete any work on any materials containing asbestos. Working with asbestos isn’t something that you should attempt by yourself. Doing so could increase your risk of disturbing asbestos fibers, thereby imposing severe health risks to you and others.

How To Spot Asbestos Ceiling Tiles

Unfortunately, it can be challenging to identify whether your ceiling tiles are made from asbestos without confirmation from the manufacturer. However, there are some things that you can do to get around this, such as:

When Removing Mold From Ceiling Tiles

Unlike asbestos, it isn’t always necessary to hire a professional contractor to remove or replace moldy ceiling tiles. There are, however, exceptions to this rule, and these include:

Ceiling tiles can cause many long and short term health issues, including:

Over the years, toxic substances such as asbestos, formaldehyde, and PVC have been used in ceiling tiles. Once installed, the tiles have been found to cause significant harm to health when damaged, overheated, or exposed to excess moisture. Another cause for health concerns related to ceiling tiles is water damage and the build-up of mold.

When removing your ceiling tiles, there are some occasions when you should consider hiring a contractor. And one of the most significant times is if your ceiling contains asbestos.