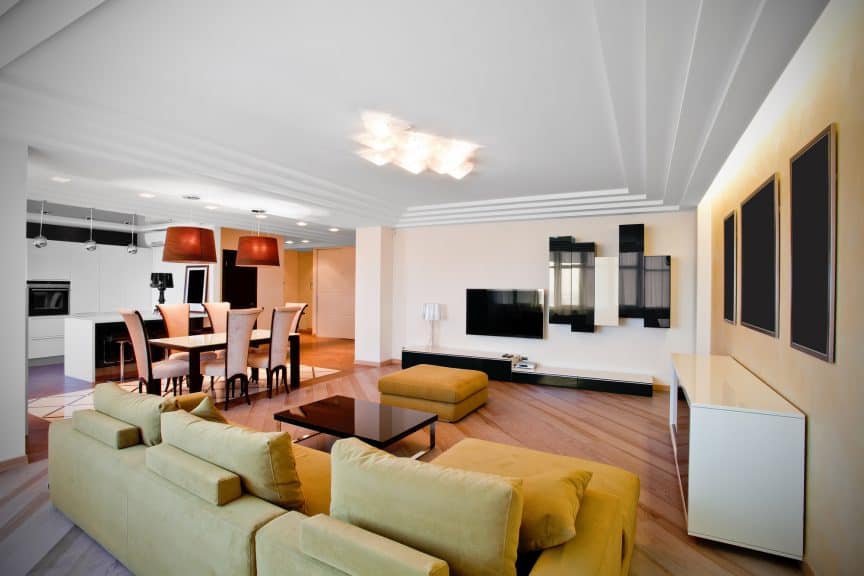 Almost everyone has had the experience of looking up at a ceiling only to find patterns in the paint or tiles above you. I know I can spend hours looking at all the different patterns I can find in a ceiling, whether they’re painted or not. However, have you ever wondered why some ceilings have patterns on them?

Some ceilings have patterns on them due to textures with specific purposes. Other times, the pattern is purely decorative. Often, textured ceilings are used to save time and safely cut costs when finishing a room by eliminating ceiling plaster and sanding.

In this article, I’ll be explaining more about why some ceilings have patterns. This will include clarifying the different patterns and textures ceilings can have.

The first thing to figure out when trying to determine why a ceiling has a pattern on it is whether or not the pattern is intentional.

People, in general, tend to find patterns in things even when they don’t exist. It’s why you can see shapes in clouds, or people say they see a pattern on the moon!

Other times, patterns are evident and intentional, like when you see a painting or a printed design.

Painted ceilings or color patterns can be classified as intentional patterns.

That means when the ceiling was finished or redone, the pattern was purposefully put there for you to see later.

Instead, textured ceilings or speckled ceiling tiles can be considered unintentional patterns.

That means that the layout of the “pattern” you see is entirely random.

The reason behind an intentional or unintentional ceiling might be different, so it’s good to know which one you’re dealing with when you ask this question.

Not all intentional ceiling patterns are the same and don’t necessarily all serve the same purpose.

However, the one thing that intentional ceilings have in common is that the pattern you see isn’t just a trick of the eye and is part of the look of the ceiling.

The reasons you might have an intentionally patterned ceiling can vary. However, these ceilings are primarily decorative.

You may wish to cover up any unsightly stains or discoloration, or you may enjoy the look of a patterned ceiling.

Even if you use your building materials to create a pattern, the pattern itself will only serve the purpose of home decor.

The most obvious example of an intentionally patterned ceiling is a fresco ceiling.

By fresco, I mean a ceiling with an intricately painted design on it. One of the most famous examples of these ceilings is the Sistine Chapel.

It would be nearly unthinkable to have a ceiling like that in most places.

However, any painted picture or intricate design that has been meticulously painted can be considered a fresco.

A similar example of an intentionally patterned ceiling would be a ceiling with a pattern or design painted on its plaster.

This differs from the normal fresco as these designs are usually less detailed.

For example, you may use a sponge-paint design to create a pattern on your ceiling, or you may use wall stamps or stencils to pattern your ceiling without all the fuss of a free-hand design.

Though not “paint,” I’d also include wallpapering your ceiling in this category.

Using wallpaper on your ceiling would give it an intentional pattern but isn’t as labor-intensive as a fresco.

The last way you can intentionally pattern a ceiling is by using your building materials.

If you use solid-colored ceiling tiles, you can create a purposeful color pattern by alternating your tiles.

This method could be as simple as alternating black and white tiles in a checkerboard pattern or as complex as creating more dynamic color patterns with a quasi-mosaic result.

You can create an intentional pattern with nearly all types of ceiling materials. Even wooden ceilings are, in part, purposeful in their patterns.

If you alternate types of wood or how the beams are laid out on your ceiling, you’re creating a pattern of sorts.

This is true even if the woodgrain will still create a randomly occurring intentional pattern.

Now that you know about the main ways you can create intentional ceiling patterns, it’s time to look at the more common types of patterns you’ll find.

The first unintentional pattern you may encounter is the random pattern you’ll find when using certain types of ceiling tiles or materials.

That’s because wood isn’t smooth or uniform in color.

Woodgrain has a natural pattern that you can’t cover up no matter what sort of stain or finishing products you put over it.

This pattern isn’t intentional but is often noticeable.

Your ceiling tiles could cause another type of unintentional pattern you might have on your ceiling.

That means the pattern you’ll see on the ceiling is completely unintentional.

Textured ceilings are the most common type of unintentionally patterned ceilings.

Unlike the other types of ceiling patterns in this article, the reasoning behind a textured ceiling is often not purely decorative.

Since you can see the texture, it often looks like a pattern on the ceiling, even though that isn’t entirely accurate as a description.

While you might think you can see designs or more consistent patterns in a textured ceiling, that’s most likely your brain trying to make sense of the random texture layout.

What Is the Purpose of Having a Patterned or Textured Ceiling?

The purpose of having a patterned or textured ceiling may be to enhance soundproofing or hide imperfections. The process of removing ceiling texture is also time-consuming, so, in some cases, a textured ceiling can save you a lot of time.

Below, we’ll look a little more closely at each of the different reasons to have a patterned or textured ceiling.

The texture in ceilings or ceiling tiles can absorb sound the same way carpet can. This can reduce echos and also help contain noise in one room.

Soundproofing is a significant reason why textured ceilings are often used in schools, office buildings, and hotels.

While not always its primary purpose, textured ceilings can effectively hide ceiling imperfections.

Unlike intentional patterns, which can hide discoloration, ceiling texture is often used to conceal uneven areas that aren’t color-related.

That’s because, since your ceiling will be uniform in its color shade, discoloration won’t be hidden well with this method.

However, there are plenty of non-structural imperfections your ceiling may have.

The plaster in your ceiling might be uneven, or there may be natural or accidentally created dips or divots in the ceiling that don’t compromise the structure but might be unsightly.

A textured ceiling will help to hide this.

While you might still see the imperfections if you look closely, the pattern and texture will help to obscure them.

The last and most common reason someone might choose to have a textured ceiling in their space is to save time.

With a non-textured ceiling, you or your contractor will have to plaster and sand your ceiling to make it nice and smooth. The same is done to plastered walls.

This process is time-consuming in every situation, but it’s made even more difficult due to the nature of ceilings.

You have to be on a ladder, often bent at awkward angles, your arms are more prone to get tired, and gravity will feel like it’s working against you.

All of those less-than-ideal conditions will combine to make the process of plastering your ceiling take much longer than it would for any other surface.

The same is the case for the sanding process.

Much of the headache of this project can be avoided if you decide to go for a textured ceiling.

By using a texture for your ceiling, you’ll be finished with a room much faster and with much less hard work than you’d need for a smooth ceiling.

There are different types of textured ceilings you might encounter. It would be impossible to list them all, but here are just a few of the most common:

All of them can be used to serve similar purposes, but some of them may be more appropriate for certain uses than others. Here’s a closer look at each type.

Unlike most other textured ceilings, the texture in perforated tiles is “inverted,” not raised. By inverted, I mean that the texture is created by little holes poked into the tiles.

Instead, you’ll often find that ceilings will have a raised texture, meaning that it’s created by material sticking out from the ceiling.

These tiles are often used in drop ceilings to hide pipes or wiring that isn’t concealed by the building’s structure in itself because they’re lightweight.

That means they often serve an aesthetic purpose. However, the little holes also help to absorb sound, which makes this a great soundproofing ceiling option.

The commonly thought of popcorn ceiling is mainly found in older buildings, but it’s still very familiar to the general population.

That’s because rather than sanding the plaster of this ceiling type smooth, you intentionally use a brush to create the raised and bumpy pattern you get as a result.

Since this is the most commonly used type of textured ceiling you can find in buildings of all kinds, its purpose falls in all three categories we mentioned in the last section.

The ridges and valleys formed by the texture help soundproof a room, making this a popular hotel and apartment option, particularly in buildings built in the 1970s-1990s.

It can also cover up some imperfections that might form during the construction process, particularly in buildings that are under a strict completion timeline, like an office building.

Lastly, this type of ceiling is often used in large construction projects with many ceiling areas to complete.

In these cases, the extra time needed to put a smooth finish on a ceiling can mean additional days or even weeks before the ceiling is done.

This texture doesn’t affect the physical condition of a ceiling and speeds up the finishing touches, saving everyone involved time and money.

While not as exaggerated as a popcorn ceiling, an orange peel texture is also commonly found on ceilings.

That’s because, while still not smooth, the orange peel look is less noticeable than textures with larger or sharper designs to them.

This texture is often achieved with a spray, saving a lot of time once a ceiling is ready to be finished because you can get the project done much quicker.

You’ll still be able to absorb some sound with this texture as well, and you’ll be able to hide some minor imperfections.

However, if those are your two main motivations behind wanting a textured ceiling, this may not be the best option.

You might come across a ceiling with a pattern on it for multiple reasons. Some ceilings have purposeful patterns that are part of a room’s decor.